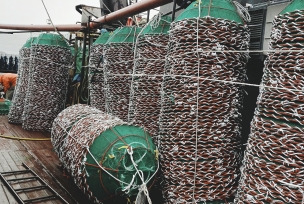 Shrimps on our menu

Established in 2015 as a crab producer, Seagourmet Norway has soon become one of the biggest players on the global market of seafood.

That became possible due to close cooperation with SIA North Star – an owner and operator of four vessels running under EU flag – that regularly supplied Seagourmet Norway with live snow crabs. Back then the factory worked in full swing, while its average production output reached 8-10 tonnes of cooked frozen crab clusters daily.

In September 2016, the supply of snow crabs was put on hold after EU and Oslo failed to come to terms regarding quotas and possibilities for European boats. EU vessels were practically ousted from snow crab business, and SIA North Star had to withdraw its vessels back to the shore. The case was brought to courts, and is still under litigation.

Seagourmet Norway tried hard to find alternative suppliers of live snow crabs but luck was on other side. Norwegian vessels were not that eager to deliver live snow crabs to the shore, while EU vessels had been pushed out of the fishing area.

“We believe the production of snow crab will be resumed”, say the team of Seagourmet Norway, “We should not give up and wait forever until EU and Norway come to terms”. With this in mind, the company decided to take a look into other popular seafoods. Northern cold water shrimps sounded promising and tasty.

On August 11, Saturday, a vessel again operated by SIA North Star, set off to the Barents Sea chasing shrimps – pandalus borealis. Unlike common practices, shrimps will not be cooked aboard, but they will be kept tenderly in special tubs and delivered live to the factory of Seagourmet Norway in Batsfjord. Furthermore, shrimps will be caught in pots rather than trawls to ensure the best possible quality of shrimps. This is quite an innovative approach. Fingers crossed.

“The boat is expected to bring its first catch in a week or so. Although our expectations are quite high, I cannot say for sure yet what volumes and sizes we will be able to offer”, says the head of sales Andrei Kazakov. “We are exploring different market channels right now, and we will act accordingly”.

Seagourmet Norway sees fresh cooked shrimps as the main product. Some shrimps will be sold to other factories for peeling and deeper processing.